Downtown Auckland, 6:41 remaining in the game and the Breakers have but a precarious 4 point lead. Following their disappointing performance at the North Shore Events Centre against old foils the Perth Wildcats, the Breakers came out of this one with a spirited effort. They were pressuring the ball on defense, and on offense they were running hard to the rim and making the extra pass.

But despite Cedric Jackson’s apparent dominance in getting to the hoop at will; despite the half dozen Gasol-like dimes from Dillon Boucher; despite lively and energetic performances from bigs Will Hudson and Alex Pledger; despite dominating the game in every aspect but the scoreboard, the home side just couldn’t shake this Adelaide team.

Jackson was getting into the paint but missing gimmies. Boucher’s passes found open teammates who botched layups. Hudson in particular, found himself in the right place at the right time (in stark contrast to his debut performance), but struggled to put away all his chances. The game had the feel of a soccer match where one team dominates possession and shots on goal but is continually denied by the post.

Despite all this, the Breakers looked like they had the psychological edge at the half. They were playing with swagger and an assuredness which they lacked in week one. But as they continued to muck away their chances, the Sixers began to grow in confidence in the second half and uglied up the game and closed the Breakers’ 7 point halftime lead to nothing.

Before they knew what hit them, the Breakers all of a sudden realized that their season could be on the brink. An uncomfortable hush swept over the crowd, not only because of the game situation, but also because the Sixers had successfully managed to ugly-up the game, with the Breakers’ scoring going down from 21 in the first quarter, to 15 in the second, and all the way down to a mere 10 in the third. Despite being soundly outplayed, the Sixers smelled blood – they could potentially escape Auckland with a W. 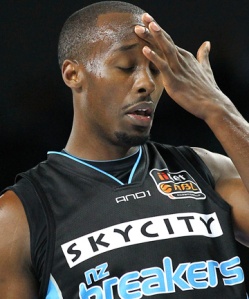 “Do I really gotta do everything around here?”

And all of this, is what made the ensuing action at Vector Arena all the more remarkable.

6:41 left in the game, Cedric Jackson lines up a three: nails it. He waves his arms at the crowd, imploring them to get back into the game. Jackson then blows by the Sixers defense to the hoop for an And-1. He would go on to miss the free throw, but he explodes towards the basket off the miss, rips the ball out of the rebounder’s hands and puts it in for another deuce. In the blink of an eye, it was 58-49 Breakers and Jackson would bring the ball back down for a heatcheck step back three: MONEY.

The crowd going bonkers, the Sixers call a timeout. It’s pointless. The Sixers try to bring the ball up but Jackson steals it and goes the other way for a transition dunk. In less than two minutes, one man had imposed his will on the game and turned what was at the time a tight affair into a laugher.

With two minutes remaining, Jackson would conjure up a sweet dish to a rolling Alex Pledger for the exclamation point to his evisceration of the Adelaide club, and put the home team up by 16. Game over.

Former NBA analyst (and current Golden State Warriors head coach) Mark Jackson used to always say: “Big time players, make big time plays”. Such was the case on Friday night at Vector Arena. With the defending champs on the ropes, Jackson shrugged off his 2-10 shooting performance and dug in deep, knowing full well that as the team’s leader and best player all eyes were on him. He didn’t shrink from the pressure – rather, he embraced it and invited his teammates to hop on his back because there was no way in hell that he would let them lose tonight.

Every championship team has a reference point – a point in the season where all the team had was each other, and with their backs to the wall and their mental and physical strength being tested, they band together and produce a season-defining performance. It’s as yet perhaps too early to pontificate whether or not Friday night’s performance will serve as that reference point for this team. They still have some important questions to answer, especially in terms of putting together a complete offensive performance.

But for one night, as “MVP” chants rained down from the stands, Cedric Jackson put the NBL on notice:  the defending champs aren’t going anywhere without a fight.