I’m sure our readers (all three of you!) have noticed the lack of posts the last week or so. With various assignments and midterms to do, we at Double Technicals have not had much time to watch the playoff games too closely, let alone write about them. However, this hasn’t stopped us from wasting our time trying to figure out which NBA team would win in a hypothetical fist fight to the death. What began as a fierce facebook-chat debate has led to a 1500 word blog post, and here we are.

The rules: standard street fight with 5 guys a team. They can be any 5 guys on the roster, but to make it fair we stipulated that it should be (loosely) 2 guards 2 forwards and a center from each team. The winner is the team with the last guy standing (i.e. you fight till death/unconsciousness).

Also, no touching of the hair or face

Here’s how we see the first round playing out: 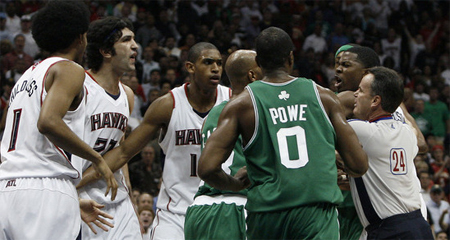 The Hawks boast a crazy insane man in Zaza and an even crazier more insane player in Ivan Johnson. If you didn’t know about Ivan Johnson, check this out. He’s definitely somebody you don’t want to fuck with. The Celtics’ leader is a man known to pick on small European players, and mostly lets his mouth do the fighting. Not gonna lie, the Hawks guards probably won’t even need to fight as Ivan and Zaza take out the Celtics by himself. But if they are called into duty, Jerry Stackhouse is one of the most feared players in the league with the beatdowns he dishes out.

Rondo is pretty fearless, as evidenced by the time he tried to step out Ron Artest in the 2010 Finals, but let’s be honest his arms are skinnier than my dick. And while everyone talks about how tough Pierce is for surviving the multiple stab wounds in that nightclub fight in 2000, everyone knows a true G woulda pimp slapped the knife out the attacker’s hands immediately. Plus he needed a wheel chair after getting a widdle boo boo on his knee. Pussy. 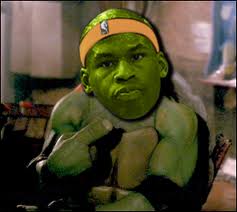 As useless as Blake is on the court, clearly the man knows how to fight (ed note: ROFL). Kobe plays through a myriad of injuries and he’s definitely one of the toughest players ever, but his reaction to Chris Child’s elbow and his roll around scuffle with Reggie Miller just doesn’t help his case. Meanwhile, Gallo has 5 inches on Kobe and if anybody’s seen him play, he looks like one of those bullies that’s involved in every fight in high school. I’m sure Harrington’s picked up a few tricks form his Ninja Turtle buds but at the same time, Artest has seen a guy die on the court after getting impaled in the heart with a table leg (QUEENSBRIDGE! YOU ALREADY KNOW).Faried is nicknamed the Manimal, but he’s nowhere near as ferocious as his nickname suggests as he never seems to stop fucking smiling. Bynum is a nerdy spacehead, while Mozgov is Russian. Never fuck with Russians.

At this point I don’t think it’s even close. World Peace swings this matchup for a Lakers victory.

Perkins is notorious for his permanent scowl, and for just being a mean motherfucker in general. His pairing with Collison will give the Thunder a huge size advantage. Custodian Cardinal is on an NBA roster purely for his ability to dish out hard fouls but I think he’s just too slow and bald to have much of an impact. Delonte is a scrappy little guy and a true G, and Westbrook is a pretty feisty guy as well. He’s had a few angry moments but most of them at his teammates, so if he suffers a few blows, he might just take it out on his team and the Thunder will succumb to his destructive behavior.

Still, I like the Thunder to take this one.

We know that Steven “Da Trill Stack 5” Jackson has always got his teammates’ back and is ready to throw down anytime. But it was literally impossible to pick anyone else on the Spurs who could throw down so I drew their names out of a hat. The Jazz win easily behind their massive size advantage – no matter how much of a thug you are, that means nothing when you have three 260+lb big men beating you down.

I AIN’T EVEN MAD THO

Blake said “what” one more time

“Yo Dalembert, what’s the capital of Thailand?”

Two of the chippiest teams in the league. Although the Clippers flop a lot and some of them have been accused of being “fake tough guys” they are still not a team to be fucked with. Kenyon is big and nasty and has a neck tattoo. Randolph was a member of the infamous Jailblazers, and we’ve all heard the stories of his off court exploits (too many to link. Just google them). Also, every photo of him looks like a mug shot. Gilbert could be the wildcard here if we allow him to bring his guns (pick one), but if we do that then that opens the floodgates and it’ll mean that Dallas romps everyone as Delonte brings his terminator-style arsenal to the ring and wipes everyone out. Fuck that.

Caron Butler’s been arrested more than 10 times in his youth, so you know he’s pretty ruthless. On top of that his nickname is “Tough Juice”, and he once walked off a dislocated kneecap because he refused to be carried off in a stretcher in front of his family. Don’t fuck with Tough Juice. Gasol is massive, but he’s also quite fat.One thing you have to constantly be on high alert for with this clippers team though is the nut shots, as CP3 and Reggie Evans in particular excel at this technique.

Neither of  these teams have much to offer in a fight. As athletic as the Heat are, LeBron avoids most confrontations and is a nice-guy. All Amare would have to do is picture him as a fire extinguisher and he’ll be able to beat him to a pulp.

The greatest GIF of all time

Wade is a crybaby.

Douglas has so much pent up anger from warming the bench that he’d release it all in a big ball of FUCK YOU. As we all know, Chalmers is a user of marijuana so he’s most probably a chill and relaxed guy. You probably won’t even now who Harrelson is, but he sports an ugly moustache, while Haslem is a tough physical glue guy from a tough Miami neighbourhood. Chandler and Howard would be an epic battle, both extremely tough guys who don’t take shit from nobody but I’ll have to give this one to Howard. He’s been throwing elbows in the league for nearly 2 decades and he’s never ever been one to shy away from dirty plays. Although at the same time, Chandler reps Compton so hmm…

Rose was raised in one of the toughest neighbourhoods in Chicago, but can anybody really imagine him in a fight? Given his bad history of injuries and his extremely shy nature, it’s hard to imagine him fighting. Evan Turner is nicknamed “The Villain” but he has the whiniest voice in the league and beefed with a skinny white scrub who nicknamed himself “Club Trill” in college. You may be surprised why I have Hamilton on this list due to his skinny frame, but he’s ghetto as fuck and pretty fearless. Pimp slapping a 7 footer gets the “he ain’t scared of shit” approval from me. Vucevic is Serbian. Noah is French. Nuff said, advantage Sixers.

According to Jared Dudley, you don’t wanna fuck with Jason Richardson as he’s supposedly a pretty good boxer. And Dwight Howard lifts. But I think he’ll get beaten up while trying to decide which Pacer he wants to beat up, then complain about how his teammates are shit, while Turkoglu watches it unfold while munching on a slice of pizza. Pacers win. 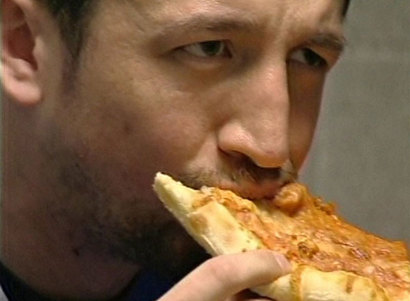